The iconic Tauranga Half has been part of the Mount Maunganui summer since 1990, making it one of New Zealand’s longest running and most iconic triathlons.

On January 2nd, a gloomy Tuesday morning back in 1990, the starters gun when off and more than 230 individuals and 80 team swimmers plunged into the tide and headed off into the maze of boats clustered in the mist. Inaugural race director Bruce Trask said “we thought if we got 100 people in total, we’d be going ok”, so even though it rained like heck, it pretty much went off without a hitch.

In driving rain Scott Balance, a 24yr old Wellingtonian, became the first winner of the Tauranga Half with an inspired run, passing Dave Spring in the final km to win by 12secs. In contrast, a big swim had Karen Williams, 34, in the box seat early in the women’s race. She exited the water in second spot, quickly took the lead on the bike and was never headed.

Highlights over the years...

1991: Much to the surprise of several hundred gob-smacked spectators, one German competitor stripped off completely in the first transition. While stark naked and drying himself with a towel, he seemed un-surprised after hearing comments from the crowd and just said “Vot is ze matter?”!

1993: The Tauranga Half was given national elite status, doubling as the NZ Long Distance Triathlon Championships.

1997: For the first time, the Tauranga Half was postponed a day after the remnants of Tropical Cyclone Drena slammed into the East Coast of the North Island. It was with considerable relief that Sunday dawned bright, fine and calm- with some fast times resulting.

1998: With a capacity field of 1200, the impact of the race on the city also became apparent, with a study showing the event was by far the region’s biggest sporting money-maker, injecting $3.5m into the Wester Bay economy year. Cameron Brown, at 25yrs old also wins his first of many Tauranga Half’s in 3hr 56min & 31s.

2001: Karen Williams inspired so many to have a go themselves, as she completed the Tauranga Half with a broken arm, proving if she could that- anyone could do it.

2003: Tamara Kozulina from the Ukraine, became the first European athlete to feature in the top three at the Tauranga Half.

2009: The 20th Tauranga Half, sold out its 750 individual entries in just 8hrs and the 150 three-person team entries lasted barely a day. Samantha Warriner sets the female course record which is yet to be broken, at 4hr 10min & 47sec.

2015: A selection of events was added to the Tauranga Half to create a festival that appealed to a wider range of people with varied athletic abilities. These events now sit under the umbrella of the Mount Festival of Multisport.

2019: The Tauranga Half celebrated its 30th anniversary of this much-loved event. 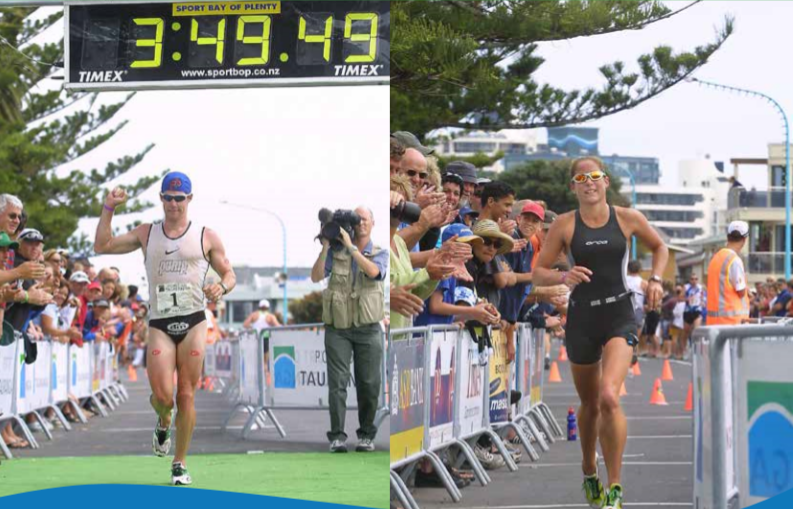 The Mount Festival events calendar has been carefully developed over the years with a range of events that include:

The hallmark Tauranga Half

and The Athlete’s expo.

With an enthusiastic and experienced team behind the event, plus huge support from the local Tauranga City Council, the Mount Festival of Multisport is certain to remain the most iconic and destinational multisport events that New Zealand has to offer.

The Mount Festival is a Registered Charitable Trust and was established under the charities commission act in 2015.

This means that each year all profits made by the Mount Festival of Multisport are donated back into the local Tauranga community.

Game Changing Support for the Tauranga Half